Tweet lull and thumbs up: the Viennese elections in the Social Web

The votes are counted in Upper Austria and now the whole country focuses on the upcoming elections in the capital. Outdated posters and the obligatory lighter are accompanied by the social web when it comes to canvassing. But how well do the parties perform in this more or less new field? 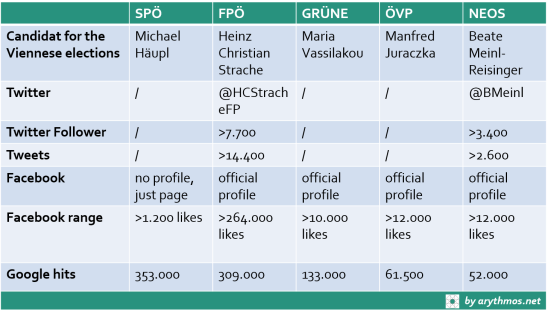 Michael Häupl is the number one in the town hall since 1994. It seems as if his Social Media work dates back to the same year. He has neither Twitter nor Facebook, the only thing to be found is the Wikipedia entry on Facebook that 1,200 people like. However, you have to add that there exists quite active SPÖ Vienna profiles on Facebook and Twitter to keep Fans and Follower posted. Nevertheless improvable.

Over 264,000 likes are counted on the page of HC Strache. He is even beating Austria’s star journalist and info luminary Armin Wolf when it comes to likes. Though, it is questionable how much those numbers actually mean for the Viennese elections as the candidate is also very active on a state level. Moreover his pages function as FPÖ-accounts as the party itself doesn’t even have an official one! On Facebook, the interaction with the user’s functions well but on the contrary Twitter seems quite weak and more like an add-on to the Facebook page.

Her Facebook-profile is something between a personal blog and a thought through marketing concept. With her nearly daily posts the politician generates a serious amount of resonance among users. Nevertheless, she has the least amount of likes from the front-runners in this election. The question is why there is no Twitter-Account; a highly active profile of the GRÜNE Vienna with nearly 7,000 Follower might be the answer.

The ÖVP-candidate uses Facebook mostly as a platform for self-display. You will find events, interviews and articles about him. Even if the last voting suggests differently, Juraczka is overtaking Maria Vassilakou – at least when it comes to likes! It is not clear why the party doesn’t try to bring this media presence also to Twitter, given the fact that the ÖVP Vienna account is not very popular (2,700 Follower).

Beate Meinl-Reisinger shows how it should be done. Unlike Mr. Strache, she understands that there is a difference between Facebook and Twitter. She shares, posts and seems quite down-to-earth. The only downside could be that her Twitter profile is a little bit harder to find as she chooses to write her name without a blank. Her 12,000 Facebook likes are quite impressive, however Twitter is lacking behind a little bit – even though she gets great support from the party’s account (11.700 Followers).

What does Google say?

If we analyse the hits on the candidates’ names, the current mayor is in the lead. There are more than 353,000 hits on Michael Häupl. This might be because of his long political career in Vienna. In second place is HC Strache, who for sure benefits from being known all over Austria. Distant to him the others follow: Maria Vassilakou might have a good amount of hits through being in the city government for one term. After that Juraczka and Meinl-Reisinger follow.

If you analyse the current search quests on Google within 24h, HC Strache is dominating. He is searched more than any other candidate and puts them all in the shade. Only the current mayor generates some kind of traffic, the other candidates barely play a role on Google trends.